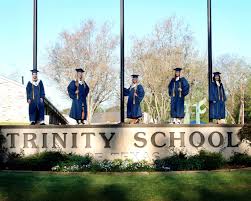 TRINITY SCHOOL OF TEXAS was established in 1957 as Trinity Day School, the parish school of Trinity Episcopal Church of Longview. After 40 years as a mission congregation, Trinity Church had become a self-supporting parish in 1932 during the enormous East Texas Oil Boom. The sanctuary, erected in 1935, had been doubled lengthwise in 1951 to accommodate growth, and a large Sunday-school wing had been added. When the Reverend Warrin Fry became rector in 1955, he brought experience with an excellent parish school at St. James’s Episcopal Church in Baton Rouge. The immediate impetus for establishing Trinity School came from Reverend Fry and Dr. A. G. Thomas, a dentist who was active in parish affairs. While attending a diocesan meeting in September, 1956, the two admired a parish school that had recently been established. At a meeting on October 8, 1956, the men advocated to create a similar school in Longview.

Does your school want to participate?